Acrodanse is a discipline in its own right, which mixes the qualities and harmony of dance with the flexibility and dynamics of acrobatics.

Moving Through Acrobatics is Gabbie Cook & Nat Whittingham: Two acro-dancers who have been teaching and performing together since 2017 in the fields of circus and contemporary dance.
They started their partnership to give all movers the necessary tools to combine and improvise with acrobatics and contemporary dance – in a fun, accessible, no-nonsense workshop series.
Each section will draw from their individual and combined styles.

Gabbie’s style is mix of soft acrobatics and dynamic tricks which she combines with floor work and improvisation; searching for a large movement vocabulary that can translate to characters and theatrical scenarios. She’ll warm-up the rhythms, levels and qualities of movement and train set-pathways within floorwork. The class will build up to longer improvised tasks, working with balance, maintaining momentum, and re-directing energy. We’ll learn phrases that combine movement with acrobatics, as well as explore tasks in relation to presence and being with the audience.
She will share the principles of acrobatics which can then be applied within choreography or improvisation. Most importantly, it is time to develop your own style and discover what interests you.

Nat’s style focusses on inverted positions and dynamism – encompassing spiralling, moving on hands, and counterbalance. He will train an eclectic vocabulary of acrobatic movements, handstand and headstand variations, falling, and twisting drills, as well as exploring his own ways of creating and maintaining momentum, improvising and finding performance states.

He will focus a lot on movement qualities within common acrobatics, and efficiency with repeated training for longevity.

Workshop Pre-Requisites: Forward roll, Cartwheel, Kick up to handstand with small balance.
Experience with some other movement discipline is always handy. 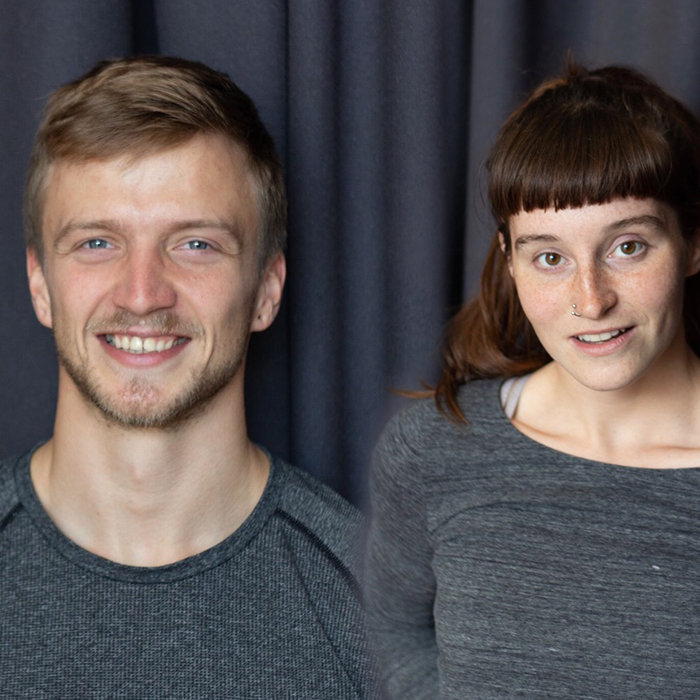 Gabbie Cook is a dancer and an acrobat; she is a performer, teacher, and movement director for circus.
She spent her childhood competing in elite artistic gymnastics before going on to train at the Northern School of Contemporary Dance, graduating in 2014. Throughout her career, she has had the pleasure of creating and touring with many inspirational artists and companies such as Acrojou, Becky Namgauds, Tom Dale Company, Scarabeus, Pirates of the Carabina and Kamala Devam Dance.
In 2019, she formed Sneaky&Raptor with her collaborator Nat Whittingham. They were commissioned by Glastonbury Arts and Bristol Circus City to develop their first major work, A Different Beast, which premiered at Glastonbury Festival 2019.
After a summer performing with Highly Sprung, she has been teaching intensives for the professional formation at CREAT Circ alongside R&D with Quiet Eye Film and Anatomical. She is currently touring Little Top with Glasgow based company Superfan.

Nat Whittingham is an Acrobat, Mover and teacher; working across circus, dance and physical theatre productions.
Formed in competitive Trampolining, before later studying Teeterboard and Acrobatics at ESAC in Brussels, his career started with an apprenticeship from Nofit State Circus at the age of 18, where he toured internationally with their shows Bianco, Open House, and Block.

During his career he has worked and created with a variety of companies in the UK and Europe, such as Cie Bivouac, Highly Sprung, Pirates of the Carabina, Lords of Strut, and Superfan, as well as R&D work with Cie Hors Surface, Upswing Aerial, ParadeofHorribles and Punchdrunk.

He formed the company Sneaky&Raptor alongside Gabbie Cook – A contemporary circus company creating dark new work, combining acrobatics and circus.
He also teaches workshops internationally, under the name Moving Through Acrobatics, as well as being a guest teacher for Circomedia, 2faced dance, Fourth Monkey Theatre School, and Northern School of Contemporary Dance.